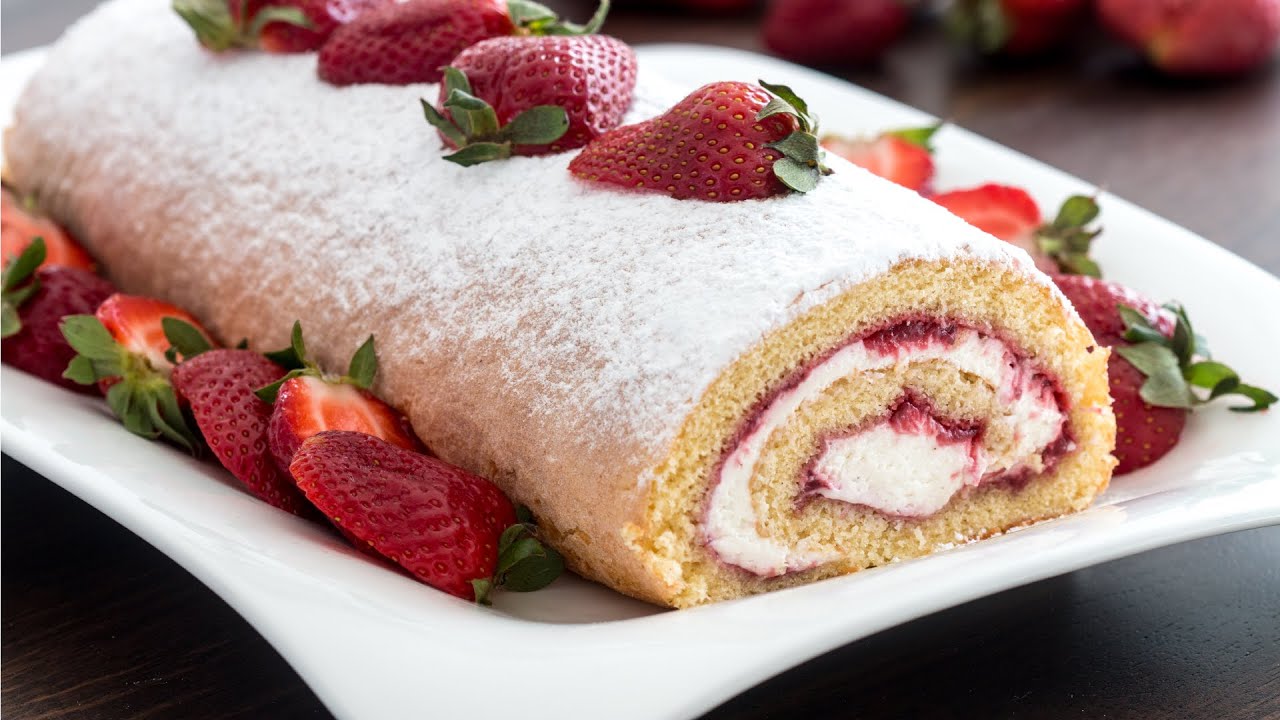 ow do you make a swiss roll? Push him down a mountain. Sorry, it had to be done. Thankfully, however, there are easier ways to score a slice of this much loved and, despite the name, very British cake. Neglected in recent years in favour of flashier rivals, it’s one of those rare pieces of patisserie to combine both style, in the form of that joyous spiral of jam, and substance – though not too much: it’s a sponge, not a roly poly.

Thankfully, for something that looks so impressive, the swiss roll is surprisingly simple to master, but, as with so many such recipes, appropriately Swiss-style precision is the key to success. So what’s the secret to a featherlight sponge, and that perfect spiral of jam?

A soft sponge demands a low-gluten flour, which is why US recipes tend to cut plain flour with corn flour or some other lower-protein variety, American wheat being naturally higher in protein than the European sort. British versions occasionally flirt with the same idea in pursuit of a more velvety result. TheFortnum & Mason formula uses almost equal parts plain and potato flour (which is, apparently, popular in Scandinavian roll cakes), and Jane Hornby’s book What to Bake and How to Bake It adds a little cornflour instead. The Fortnum’s recipe in particular is so soft it’s like biting down on a cloud (reminding me fondly of abright green roll cake I once had in the Far East) but testers prefer the flavour of the all-wheat versions. British flour tends to be fairly soft in any case, but if you are after something very delicate, seek out the stuff marked as sponge or cake flour, which will have especially low levels of gluten.

Diana Beard, a contestant in the 2014 series of The Great British Bake Off, is unfortunately remembered more for her role in Bingate than her baking, but her recipe for “Mum’s Sunday tea lemon curd swiss roll”, included in one of the series’ spin-off books, is unusual in that it uses self-raising flour, while Delia Smith’s version adds extra baking powder, too. Both rise well, but it feels a bit like cheating when, as the others prove, it’s perfectly possible to get enough air into the mixture without chemical assistance.

What you do need if you’re not using baking powder, however, are eggs, and in some quantity – Beard gets away with fewer thanks to the self-raising flour, but I have stuck with the fairly generous ratio suggested by Hornby on the basis that eggs taste better than NaHCO3 and C4H6O6.

Most recipes direct the baker to whisk the eggs and sugar until “pale, very thick and several times the volume” as Annie Bell’s Baking Bible has it, but Fortnum’s goes one step further by beating the yolks with the sugar and whisking up the whites separately, so they can be folded into the batter at the last minute, allowing them to retain more air. This, I conclude, is the principal secret of its sponge’s magnificent rise – easy, once you know how.

Beard whisks her eggs and sugar over a pan of simmering water to cook the eggs, stabilising the proteins, which, in theory, traps more air and makes the mixture less likely to collapse in the oven. However, this seems like unnecessary faff given the impressive airiness of the Fortnum’s cake.

Little argument here. Finer grained caster sugar will melt into the batter more easily than larger particles, without adding the extra moisture of less refined substitutes, which may be why I don’t come across any recipes recommending anything else (though if you do have a treacle swiss roll up your sleeve, please do pass it on – and wash your shirt immediately).

Caster also makes an excellent topping for the roll – and though it’s not quite as good at hiding imperfections as Bell’s icing sugar, the slight but pleasing grittiness it adds more than makes up for any deficiencies in the disguise stakes. I try granulated sugar, hoping to add more crunch, but it doesn’t adhere properly, leaving the finished roll looking like a half-shorn sheep. If it ain’t broke, etc.

Traditional recipes tend to stop there: flour, eggs and sugar are all you really need for a sponge cake. However, Hornby and Smith add butter, too. The latter, curiously, creams the spreadable kind together with the other ingredients, as if making a Victoria sandwich – delicious, but not elastic enough to roll up easily. Hornby, however, makes the standard whisked base, then stirs in melted butter and a dash of milk to make up a similar volume of liquid as in those recipes with a very high ratio of eggs to flour. Though the extra fat may mean the cake does not attain the lofty heights of, say, Beard’s or Fortnum & Mason’s recipes, the richer flavour and moister crumb more than makes up for this slight deficiency in stature. (In my experience, the best-looking roll cakes can err towards the bland: consider this a happy medium.)

Smith and Fortnum & Mason both flavour their rolls with vanilla, which testers welcome in such a plain sponge, and the latter also adds lemon zest, which none of us can pick up. Hornby recommends a decent 1/4 tsp of salt, rather than the more common pinch, balancing out the sweetness of the jam nicely.

A cake that stands or falls on its appearance will always demand as much care in its execution as its ingredients, and the swiss roll is no exception. Be sure to line your tin before starting (buttering and flouring, as the Fortnum’s recipe suggests, is not sufficient to stop the batter sticking) and keep a watchful eye on it towards the end of the baking time. Whip it out too soon, as I’m afraid I did to Bell’s recipe (sorry Annie), fearing it was about to catch, and it will be damp and squidgy – delicious, but unlikely to win many prizes. Leave it too long, and it will be dry and liable to crack when rolled. It should be set, but still springy to the touch.

Most recipes note that it is easier to roll the sponge while it is still warm and flexible – though the Fortnum’s version, which leaves it to cool first, does roll, it’s not an easy process, and critical testers spy a few cracks. It’s easiest to roll the sponge up and leave it for an hour, before unrolling it to add the filling, as Bell and Hornby recommend.

Beard fills her swiss roll with lemon curd, but delicious as this is, we all agree we prefer the visual contrast offered by a darker fruit preserve, such as the classic raspberry. Fortnum & Mason also adds whipped cream and fresh berries, turning its version into more of a dessert roulade, and Hornby suggests buttercream, which proves very popular with younger members of the testing panel. I don’t think my recipe really needs it, given the butter in the sponge, and the extra layer does make that neat spiral harder to achieve; but for a special occasion such as a birthday, it would make a pleasing addition. Of course, you can fill the roll with just about anything you like, from green tea and beans to bacon jam; once you have nailed the technique, the world is your oyster. Or, perhaps, your Alp. Happy rolling.

Melt the butter in a small pan and set aside. Grease and line a tin roughly 30cm x 21cm and heat the oven to 180C.

Sift the flour into a mixing bowl from a height (don’t be tempted to skip this step). Add the salt.

Separate the eggs into two medium bowls and add the caster sugar and vanilla to the yolks. Whip the whites to soft peaks using a hand whisk or electric beaters, then whisk the yolks and sugar until pale and voluminous (doing it this way round means you don’t have to wash the whisk). Whisk in the butter.

Tip into the tin and tilt to cover, then lift and drop the tin on to the workspace a couple of times to get rid of any air bubbles. Bake for about 10-12 minutes until golden and springy to the touch.

Meanwhile, cut a piece of greaseproof a little larger than the tin and dust with the extra sugar.

Loosen the sponge round the edges and then invert on to the paper with one of the short sides facing you. Trim the edges with a bread knife to neaten, then score a line about 1cm across the side closest to you.

Roll up as tightly as possible, rolling the paper in with it. Leave rolled up tightly until cool, then unwrap and spread with jam and roll back up without the paper.